Once again this year DCU was a sponsor at Ireland’s annual Digital Media Awards.  The NIDL was the named sponsor under the category of “Best in Digital Learning”. The awards were presented at a Gala Dinner on February 20th in Dublin. This year’s winner was Canavan Byrne for their work in the area of Early Childhood Education, with the silver and bronze awards going to SPG App Training and The Educational Company of Ireland. We congratulate everyone involved in these awards and hope to continue our association with this event in 2016.

We are pleased to announce that Elaine Walsh and Dr James Brunton received the Best Poster Award at the prestigious EDEN Research Workshop at Oxford for their work entitled “Assessment Strategy – Designing and Developing Assessment for Online Distance Education”. Their poster was a clear winner and validates the leading-edge work they are doing in the area of online Assessment. The Award was jointly presented at the end of Day One by Professor Antonio Moreira Teixeria, President of EDEN, and Professor Belinda Tynan, Pro Vice-Chanchellor (Learning & Teaching), The UK Open University, with official Rapporteur, Professor Tony Bates, closely watching proceedings. Congratulations to Elaine and James!

Earlier in the day, Colum Foley, also from the NIDL, gave an excellent report back to conference delegates after the first keynote address by Dr Cristobal Cobo from Oxford University.

Later in the day Dr James Brunton, Lorraine Delaney, and Dr Eamon Costello assisted Professor Mark Brown in chairing the highly successful Oxford Debate. In arguing the motion “That Open Educational Resources (OERs) have fundamentally transformed Higher Education”, Professor Rory McGreal from Athabasca University, Canada and UNESCO/COL/ICDE Chair in Open Educational Resources (OER) came up against Professor María Soledad Ramírez Montoya from Tecnológico de Monterrey in Mexico, who holds both an ICDE Chair in OER and UNESCO Chair in Open Educational Practice (OEP). After the cut and thrust of a lively debate the motion was eventually won by Professor Ramírez Montoya in favour of the motion. 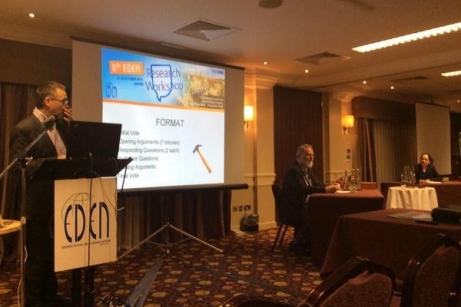 NIDL staff will be presenting two papers on Day Two of the Research Workshop, which is being attended by many leading scholars in the field from around the world. 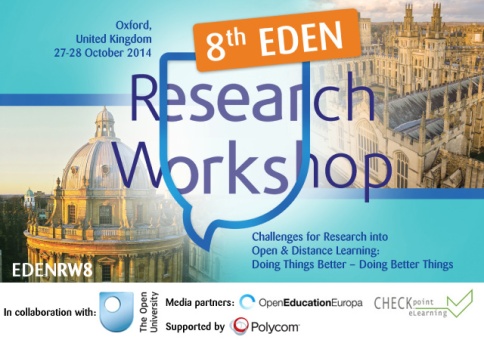